So here I am ready to jump into my recap of my week of indulgence and debauchery also known as the Romantic Times Convention week …. okay so not so much a week of indulgence OR debauchery, I’m pretty low key, but there was a lot of laughs and good times.  So without further adieu, here begins my recap.

So we (meaning half my friends and I) showed up in NOLA on Monday afternoon.  I didn’t stay at the convention hotel, choosing instead to stay at a wonderful little boutique hotel in the Quarter, called The Inn at Ursulines.  It’s part of a group of 4 such hotels around the Quarter.  The place was GORGEOUS, it is a renovated Creole Cottage that was once owned by Marie Laveau.  Unfortunately, I didn’t take pictures of the room, but if you’d like to see it, head on over to their website.  Prices were great and the room was spacious and the amenities were really good (even if they didn’t have a nozzle for the hairdryer LOL).

For the most part day 1 was used to settle in and see a little bit of the sights around us.  I did mention to my bestie that just down the street from our hotel was a convent rumored to have housed vampires …. needless to say she freaked a little LOL.  Me, I love that kind of folklore (don’t get me wrong when it comes down to it I am a grade A chicken, but as long as it doesn’t bother me, I am okay with it).

We ate a little, drank a bit and just walked around taking in the atmosphere.  If you think the Quarter is only hopping during Mardi Gras, you would be wrong. 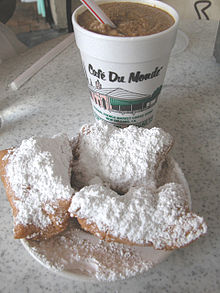 of the same, I know it sounds sort of boring, but trust me when you’re surrounded by friends you haven’t seen in over a year, even just sitting around and talking is a whole lot of fun, and if you had my friends then there’s the extra laughter that gets added to it.  We did have an impromptu photo session by the Mississippi River and they had their first experience at Cafe Du Monde (mmm Beignets and Coffee).  If you go to NOLA you must go to that place, the beignets come out warm and are soft and delish and the coffee au lait ain’t half bad.

We also decided to do a tour, a Vampire Tour.  We went with a tour group that I have used before and have never been disappointed with.  Haunted History Tours do various tours around the Quarter and their guides are friendly and know the city inside and out.  On my previous 2 vampire tours (see told ya I liked them – I’ve also done their voodoo, ghost and cemetery tours) I’ve had a guide by the name of Jonathon – he’s great, dresses like a pirate, not bad to look at and is a fantastic storyteller.  This time around we had Jyl, who was amazing as well.  Fantastic woman, who was really into the lore (including wearing fangs).  Remember where my hotel was?  Yup we parked right outside of the convent to hear about the happenings and I scared the crap out of my bestie (totally unintentionally, but hilarious).  After the tour we spent about 15 minutes just talking to her, she was full of information and a hoot as well.

I hope to have pictures to add soon, but they are being edited as we speak.  Oh oh may I add that I have the most amazing friends?  One of which, Mrs. Rose Germano, showed up with a beautiful wolf tattoo and there on the edge of it was my Dark Wolf Marking.  Squeeee!!!

Well, that’s all for now.  Until Next Time,