Hunk of the Week

This week’s hunk is not on Game of Thrones LOL (although we may have another hunk from there soon).

No this week’s hunk comes to you courtesy of a commercial I watched last night while sitting watching America’s Next Top Model (don’t judge me – it’s one of two “reality” shows I watch, the other being Project Runway)

Anyhooters, the CW showed a commercial for runaway hit The Vampire Diaries and up on my screen was yummy Ian Somerhalder … who should be named Ian Someone-smolders yumm.

I first got a good look at Mr. Somerhalder during his days on Lost (oh how I miss that show) where he played Boone.  I was sorry to see him die (hope I didn’t spoil that for anyone).   I was very excited to see him on Vampire Diaries which I watched religiously for about 3 weeks (I need to catch up) I enjoyed the show, I just didn’t have the time to devote to it that I should have.  Boy, am I glad it’s become a hit so I can catch up.

There are certain things that make me weak-kneed.  I’m a sucker for an adam’s apple (more on that in the future – maybe) and the other is a wonderfully delicious set of …. eyes, and boy are his just Ah-mazing.  The thing that got me in the commercial was when he arched his brow and I think I my ovaries went into overdrive.

But it’s not just the physical… no, Ian is also an activist.  Anyone who follows his twitter-feed, will see how passionate he is over various causes and even has begun a foundation.  I think he makes a wonderful Hunk of the Week. 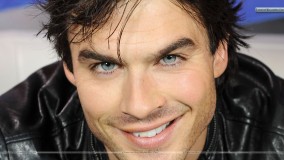 This entry was posted in Hunk of the Week, Random Ramblings, Webby Stuff and tagged blogging, Ian Somerhalder, Men. Bookmark the permalink.

2 Responses to Hunk of the Week